World War II Plaza – After World War II, the community requested a new Veteran’s Section from the Trustees of Woodside. The Trustees dedicated seven (7) acres to the Veterans Associations of Middletown which is in Section 3. The Middletown Community helped raise money to finance the 167 white marble crosses, the flag pole, the WWII Memorial Plaza, and the Memorial Chapel. The work began immediately after WWII (1945). The Memorial Chapel was dedicated in 1950. The 167 white Marble crosses, Memorial Plaza were quickly completed. 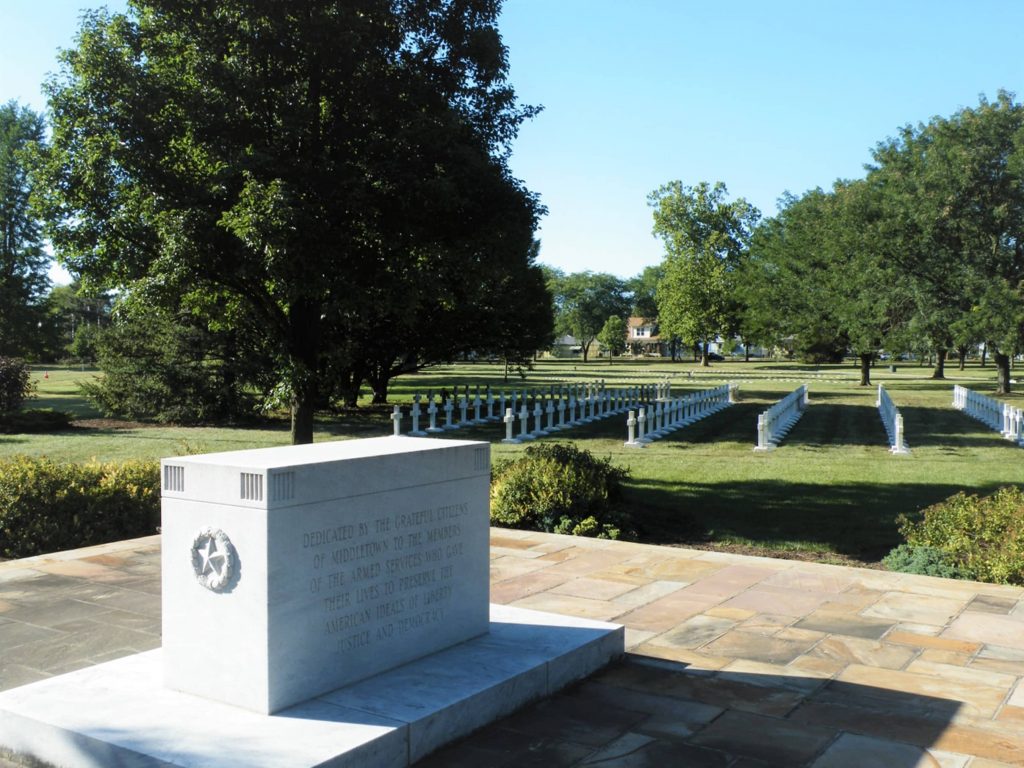 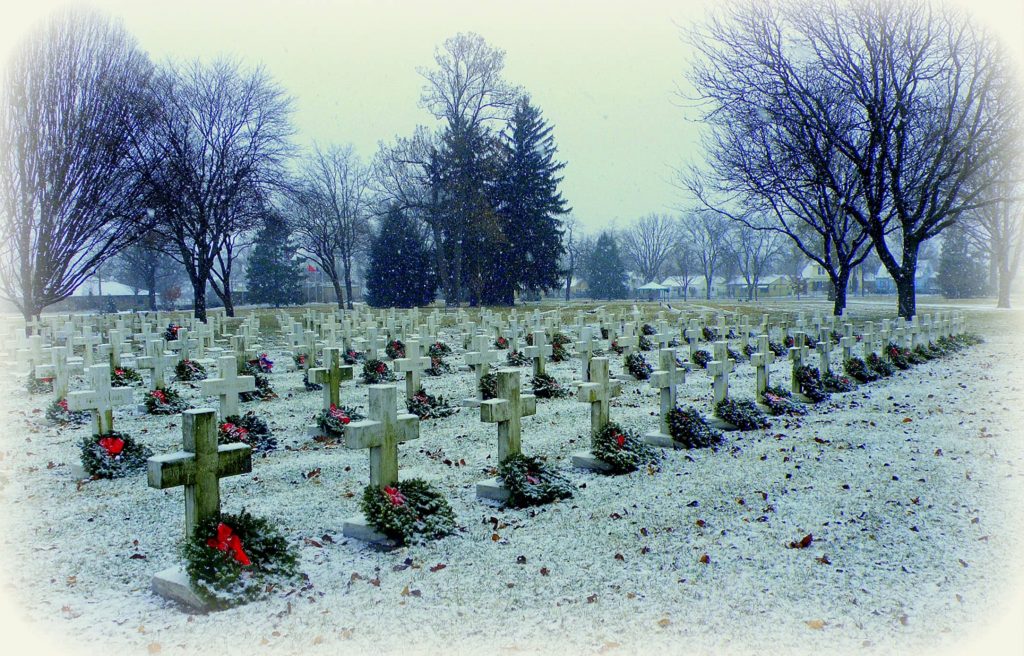 That day, Pfc Kessler demonstrated “conspicuous gallantry and intrepidity at risk of life above and beyond the call of duty” in reaction to German machine gun fire that hit his unit near Ponte Rotto, Italy. The Medal of Honor citation tells the heroic story…

“Acting without orders, [Kessler] raced 50 yards through a hail of machine gun fire, which had killed five of his comrades and halted the advance of his company, in order to form an assault group to destroy the machine gun.

“Ordering three men to act as a base of fire, he left the cover of a ditch and snaked his way to a point within 50 yards of the enemy machine gun before he was discovered, whereupon he plunged headlong into the furious chain of automatic fire. Reaching a spot within six feet of the emplacement, he stood over it and killed both the gunner and his assistant, jumped into the gun position, overpowered and captured a third German after a short struggle.

“The remaining member of the crew escaped, but Pfc. Kessler wounded him as he ran. While taking his prisoner to the rear, this soldier [Kessler] saw two of his comrades killed as they assaulted an enemy strong point, fire from which had already killed 10 men in the company.

“Turning his prisoner over to another man, Pfc. Kessler crawled 35 yards to the side of one of the casualties, relieved him of his BAR [weapon] and ammunition and continued on toward the strong point, 125 yards distant.

“Although two machine guns concentrated their fire directly on him and shells exploded within 10 yards, bowling him over, Pfc. Kessler crawled 75 yards, passing through an anti-personnel mine field to a point within 50 yards of the enemy and engaged the machine guns in a duel.

“When an artillery shell burst within a few feet of him, he left the cover of a ditch and advanced upon the position in a slow walk, firing his BAR [Browning Automatic Rifle] from the hip. Although the enemy poured heavy machine gun and small arms fire at him, Pfc. Kessler succeeded in reaching the edge of their position, killed the gunners, and captured 13 Germans.

“Then, despite continuous shelling, he started to the rear. After going 25 yards, Pfc. Kessler was fired upon by two snipers only 100 yards away. Several of his prisoners took advantage of this opportunity and attempted to escape; however, Pfc. Kessler hit the ground, fired on either flank of his prisoners, forcing them to cover, and then engaged the two snipers in a fire fight, and captured them.

“With this last threat removed, Company K continued its advance, capturing its objective without further opposition,” the MOH citation continued. Two days later, May 25, 1944, at Terracina, U. S. troops moving inland from Anzio met those advancing through Italy’s middle. But the 22-year-old Middletown soldier wasn’t part of the celebration. Kessler had been killed in the fighting that day, one of 72,000 U. S. casualties in the Anzio campaign. Kessler, who is buried in Woodside Cemetery in Middletown, was awarded the Medal of Honor posthumously Jan. 4, 1945. * * * * *”Allied forces stormed through captured Rome today, crossed the Tiber River and pressed relentlessly against the beaten German 10th and 14th armies as they streamed northward under demoralizing attacks from the Mediterranean Allied air force,” reported the Associated Press in the June 5 Journal-News. June 4 — 10 days after Kessler’s death — Allied “armor and infantry charged through the defensive screen on the outskirts of Rome,” the AP noted, “and swarmed into the city where they met only sporadic resistance.” The occupation was the “climax of nine months of hard fighting in Italy.” There wasn’t much time in Butler County to celebrate the capitulation of Rome. Less than two days later, June 6, local residents awoke to the news that Allied soldiers, sailors and airmen had assaulted German positions along France’s Normandy Coast. Operation Overlord in France quickly overshadowed the successes and sacrifices of Operation Shingle in Italy.